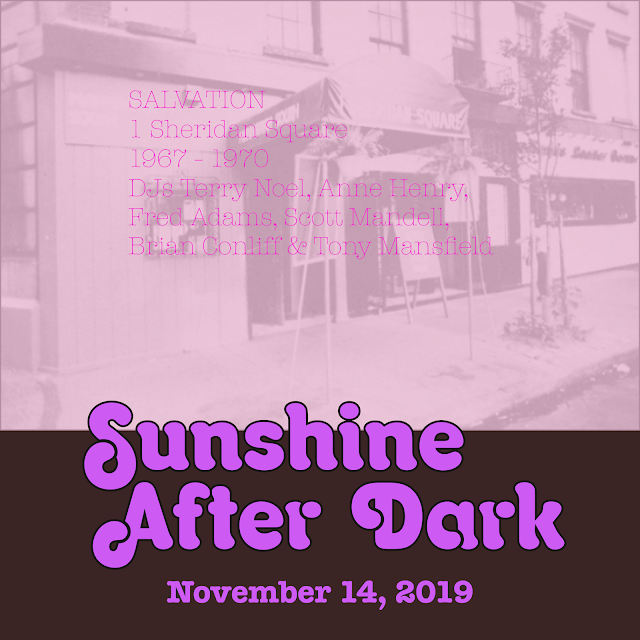 Disco Files—Vince Aletti's weekly column in Record World—first appeared on November 16th, 1974, which was a Thursday. That puts it in sync with Sunshine After Dark—a weekly radio show that airs on Thursdays—exactly 45 years later!

Record World already had a writer covering the soul music beat, the well-connected Dede Dabney, and so Aletti's column offered a supplemental perspective. Each week, Aletti would sift through the stack of promos releases and work the phones to find out from his DJ contacts in New York, LA and beyond just what was hot in their clubs that week. So, while other industry writers and publications were focusing on radio response and sales numbers (and how to get one to lead to the other), Aletti was talking to club DJs, the kind of DJ that we recognize today, an advance scout for new music: someone who goes looking for special cuts that others missed, who defines a personal sound and style for themselves and forms a connection with a regular crowd.

Each week's column also includes 4 top ten charts from specific DJs, depending on who Aletti had talked to that week, making it a rich source for tracking what releases were hot with who, and when.

On my Disco Files segment, I'll try to play at least one or two songs that are mentioned in that week's column or DJ charts. For regular listeners, the end result will hopefully be a dynamic real-time overview of disco's development, week by week.

In the first column, Aletti name checks albums by B.T. Express, Creative Source, and First Choice as getting heavy play. But I'm going to start off by playing a number of cuts from Tee Scott's top 10 list that week. Tee "Toraino" Scott was a black DJ who played at a club called Better Days and he went to have a long involvement in the scene, right through the 90s heyday of Jersey house. He passed away in 1995.

On Tee's list from this week in 1974: B.T. Express, First Choice, Gloria Gaynor and more.

If you want to follow along with Aletti's column, there are two ways you can do that. First is to track down the book that compiles them (Disco Files 1973-1978†), which was recently republished in a new edition. The other way is to trawl through the Record World issues that have been digitized over at AmericanRadioHistory.com.

To listen to the show, tune in to 88.5 FM in Edmonton tonight at 7pm, or listen online at CJSR.com. Check out past shows on Mixcloud.