On January 28th and February 4th, I'm running a 2-part special looking at some of the songs on the Disco File Essential Disco Singles of 1975 list.

Besides being the year of the viral apocalypse, 2020 was the first full year of my show, Sunshine After Dark. Throughout the year, as a special, occasional feature, I tracked Vince Aletti's famous weekly column (Disco File) through 1975 in 'real time.' The columns have been collected together in a book, which makes it easy to do.

For example, if it was March, I looked at the columns for February and March of 1975 and then searched in my collection to see what I had that was cited, and then pulled together a show from that repertoire. Later on, I decided to double down and play anything I could find on Spotify too, because the experience of hearing the really obscure stuff was just too fun.

I wanted to simulate the experience of listening to the radio in 1975, hearing the new songs for the first time as they came out, first in the spring, then the summer, the autumn and winter. I must say, it was a personal revelation for me, both in terms of discovering new songs that were hits only for a week or two before they were subsumed by the never ending stream of new releases, and also in terms of encountering music I thought I knew in its original context of songs out at the same time.

I started to notice stylistic details re-occurring from song to song, even across songs from different places, in different styles: American and European; rock and soul; instrumental and vocal. As time went on, this hodgepodge of original sources for disco would become more blended together, codified, and commercialized, but there was still a consistency across them that I could hear that seemed unplanned, unintentional.

It seems very plausible to me that there was an idea of disco that existed, collectively, in the minds of DJs, who went about searching for songs that matched that idea. There might be one song on a LP of a European hard rock group like Titanic, but you hear it now and it just jumps out at you. Yep, there it is!

And so I'm going to carry on this experiment in 2021, rolling over into 1976, which happens to be an auspicious year for entirely personal reasons, but before I do that, I wanted to have one more kick at the can for 1975. Aletti published end of the year charts for 1975, and when I looked at the singles chart, I realized I had played maybe about half of the 75 songs on that list at some point during 2020.

I thought it would be neat to hear the rest of the songs that I *didn't* play. Again, thanks to Spotify and YouTube, I've been able to find just about every one I didn't play. I decided not to worry about the top albums list or the top disco discs lists, because you could just go on forever, and 1976 awaits! I did have one of the disco discs, which I have programmed on the January 28th show, Ronnie Spector's You'd Be Good For Me.

If you want to hunt down all the songs that I played (and complete your scorecard), you can see when I played a given song by consulting my "Super Mega" Playlist Data spreadsheet and doing a "Find" search on the page. Below are the charts so you can see what made the cut in 1975! 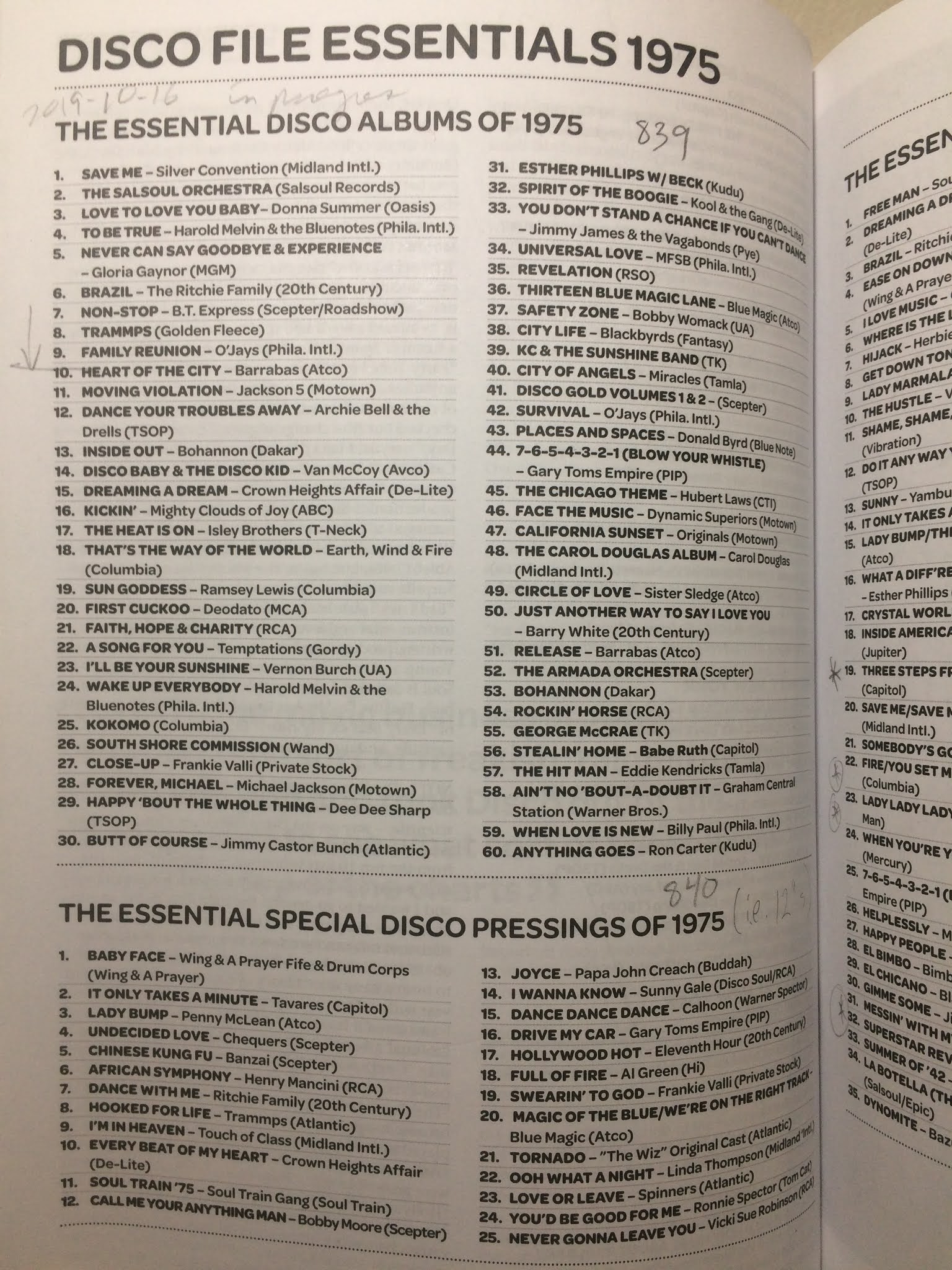 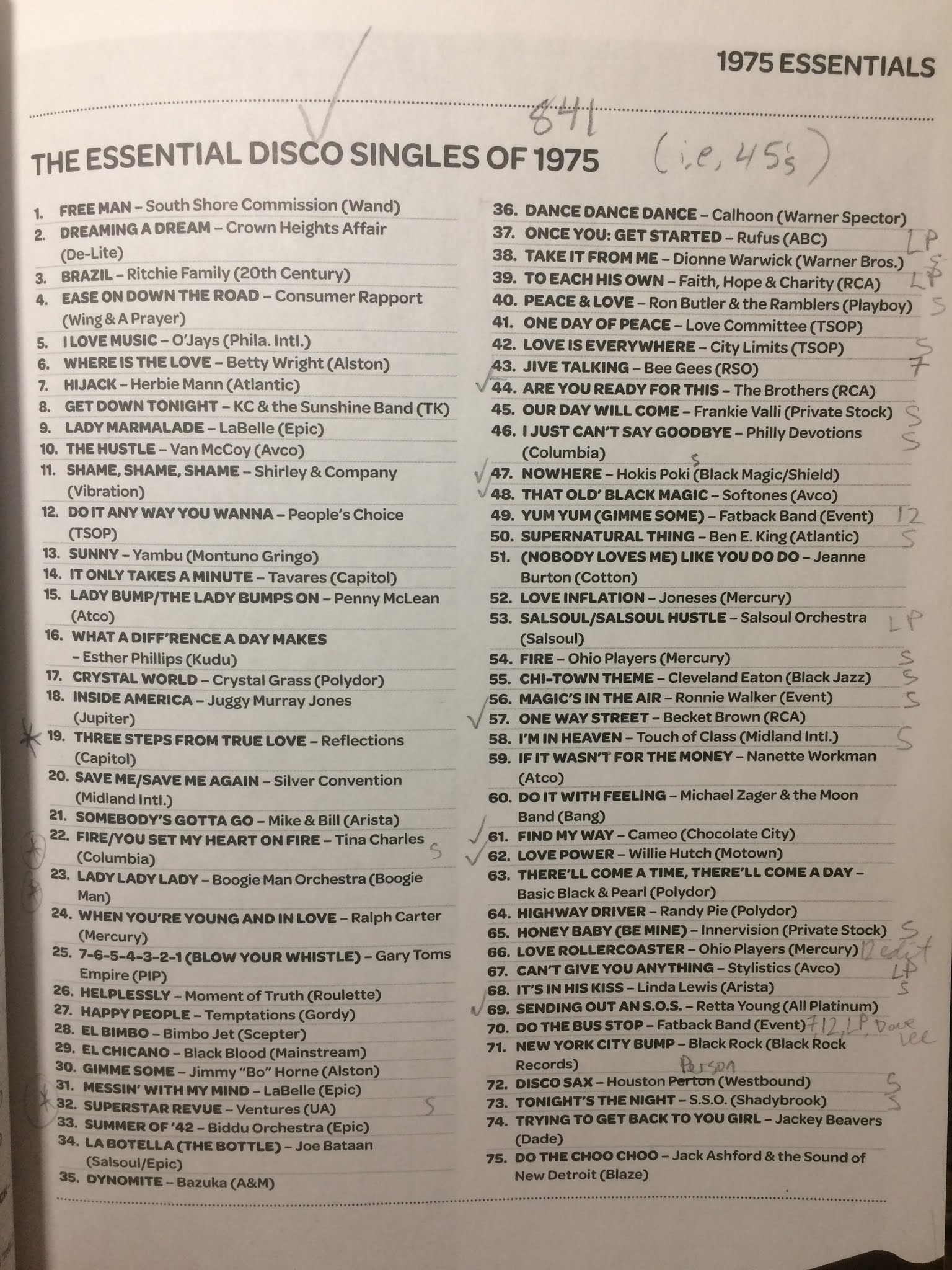